Jewellery magic in the air


Young jewellers exhibiting at GemGenève, Geneva’s international gem and jewellery show, presented collections that are rich in imagination and seemingly blessed with magical powers. Their necklaces and rings restore jewellery’s longstanding function as a talisman. The work of Wallis Hong, Alix Dumas, Elena Okutova and Vincent Michel may appear to have come straight out of a dream, these four talented makers are very real.

Jewellery magic in the air

Young jewellers exhibiting at GemGenève, Geneva’s international gem and jewellery show, presented collections that are rich in imagination and seemingly blessed with magical powers. Their necklaces and rings restore jewellery’s longstanding function as a talisman. The work of Wallis Hong, Alix Dumas, Elena Okutova and Vincent Michel may appear to have come straight out of a dream, these four talented makers are very real.
B

rowsing the aisles at GemGenève last November, it was impossible to resist the work of certain young jewellers whose creations are much more than adornment.

Wallis Hong for example. Recognisable by his slender silhouette, delicate manner and the precious butterfly alighted on his white jacket, the 27-year-old Chinese-born, Madrid-based jewellery artist transposes the fantasy worlds of his imagination into sculpted titanium jewels or onto watch dials still waiting for the movement that will bring them to life. 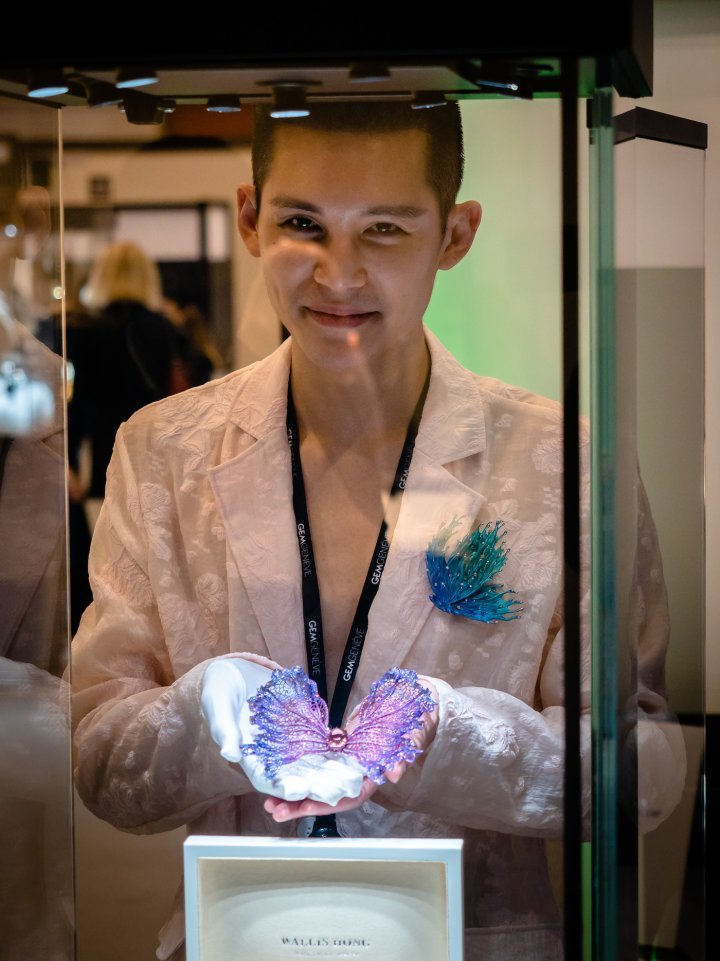 Resplendent in its display case, the Ethereal Butterfly brooch applies a hollow sculpting technique, traditionally used with jade, to titanium. Each piece is hand-carved by a master craftsman with forty years’ experience. As light skims the butterfly’s delicate wings, its colour changes from shimmering violet to red. 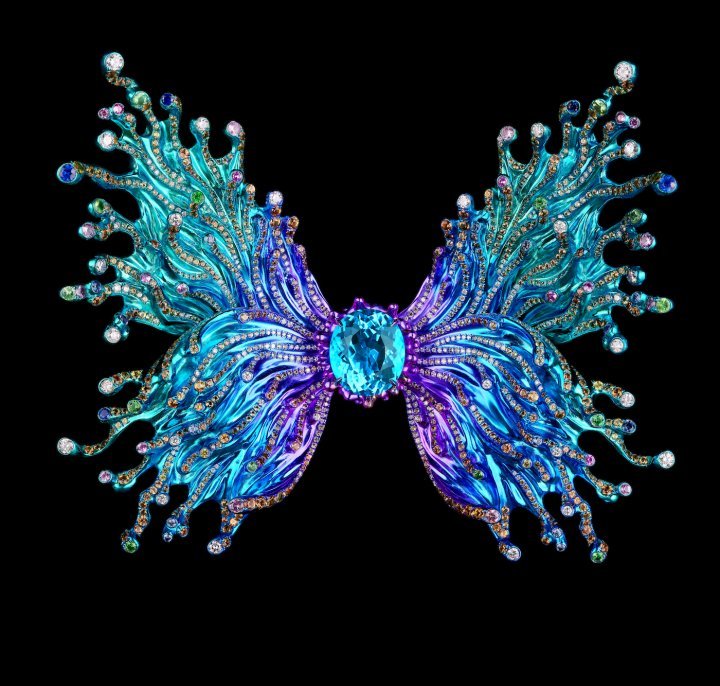 “I imagine myself living in a world beyond reality,” says Hong. “When I was young, my father took my mother and me to live in a place that seemed totally apart from the rest of the world. I’d wake up every morning in what seemed to me like a magical kingdom, with a pond, plants, butterflies and all kinds of insects whose names I didn’t even know. Everything I create comes from those childhood memories.”

One butterfly brooch, for example, recreates, in precious form, an encounter between a six-year-old Wallis and a real-life butterfly. “I was out chasing butterflies near a cave by a waterfall, when suddenly this huge butterfly flew up out of the water. I’d never seen anything so big or so colourful. The play of water and sunlight gave the impression that its wings were studded with precious stones.” 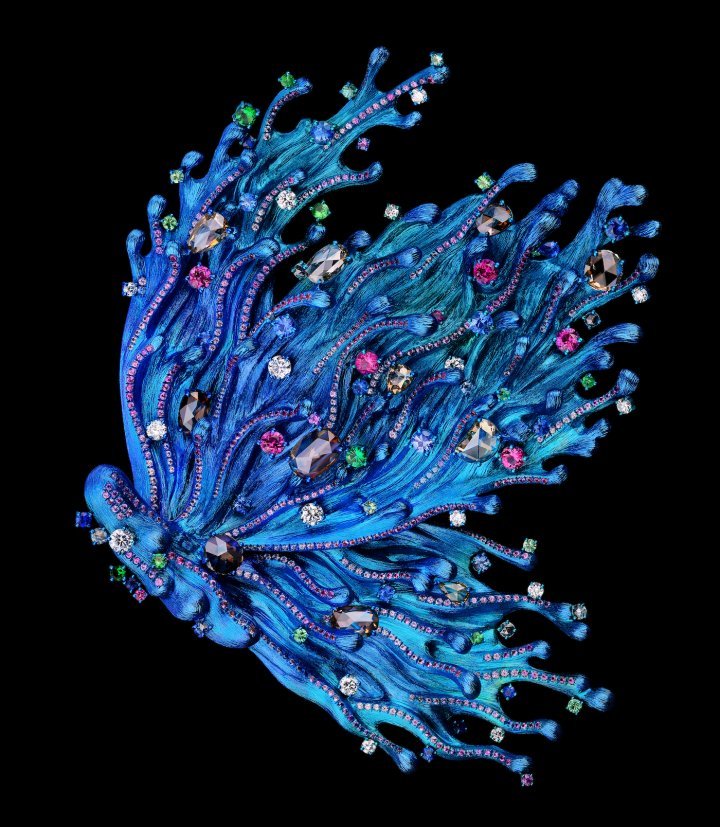 Hong’s jewellery possesses a magical quality that comes from his use of shimmering coloured titanium. “I want the people who wear my jewellery to feel like fairies come down to earth or characters from a tale. Nature is my inspiration. All my jewellery has magical powers.”

A few steps bring us to Maison Alix Dumas, where display cases are filled with jewellery that could easily have originated in the shadowy corners of Brocéliande forest… which seems quite plausible when we learn that their creator lives in Brittany.

Alix Dumas came to jewellery in a roundabout way. A degree in history and cultural project management should have seen her working in museums, but her love of hand-craftsmanship took her in a different direction. After spending time with a Parisian studio, making jewellery for some of the foremost names, she branched out on her own and founded Maison Alix Dumas. 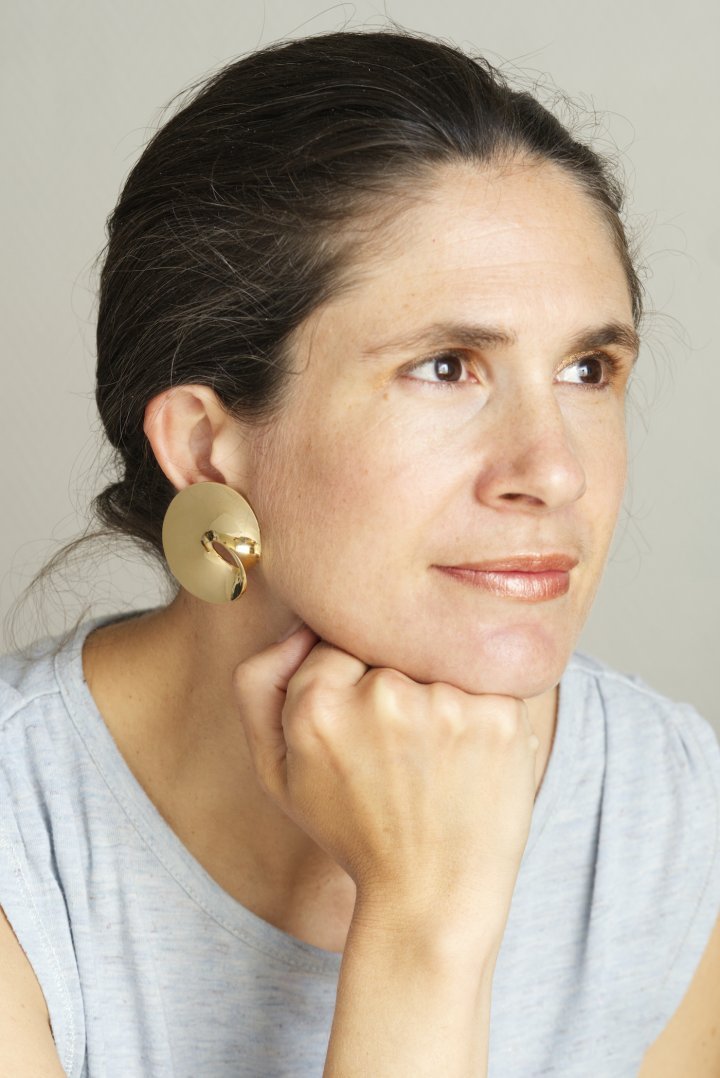 Dumas makes use of the lost wax casting technique to create the forms and volumes she requires, then, once the piece has taken shape, makes delicate incisions in the metal to introduce depth, creating a lacey surface for the eye to travel through. 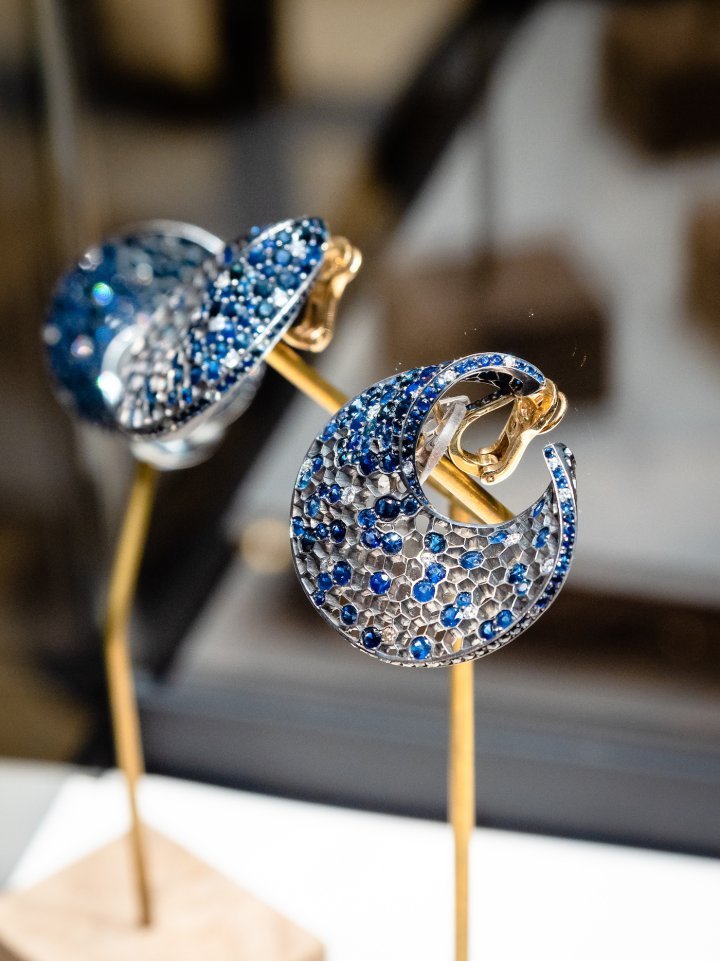 The “repercé” technique she uses produces an openwork design. After carefully piercing the metal, she inserts the thin blade of a jewellery saw to meticulously shape each hole into the intended pattern. Alix Dumas makes all her jewellery at her studio in Brittany (except for the stone-setting) and works extensively with silver for its natural propensity to blacken. 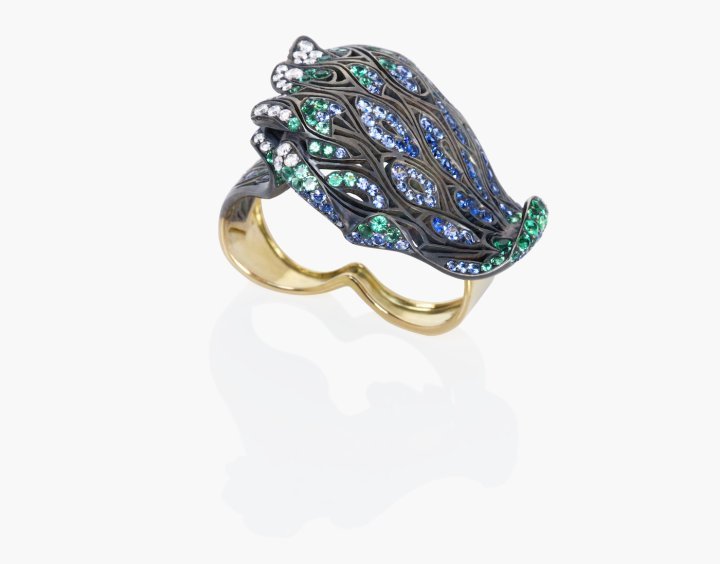 One of her rings is inspired by Hokusai’s Great Wave while another, Burmese Leaf, resembles an imaginary flower metamorphosing into a leaf or a butterfly. “Jewellery carries a strong poetic element which is important to me,” says Dumas, “as is the sculptural dimension. Jewellery can empower a person. Whoever wears my jewellery instils its with their intuition and sensitivity. My work has the power to open the doors to another world.”

Elena Okutova, who has the neighbouring booth, looks for all the world as though she has stepped out of a pre-Raphaelite painting, with her dress style and a face Ingres could have painted. The young Russian jeweller seems to have been plucked from a different century and is now determined, through her jewellery, to weave a form of magic which her clients embrace. “I’ve always been an artist,” she declares. “I’ve been drawing since I was four years old. I drew all the way through school then at the State University of Art and Industry in Moscow [where she graduated in artistic metallurgy]. I’ve never not drawn.” 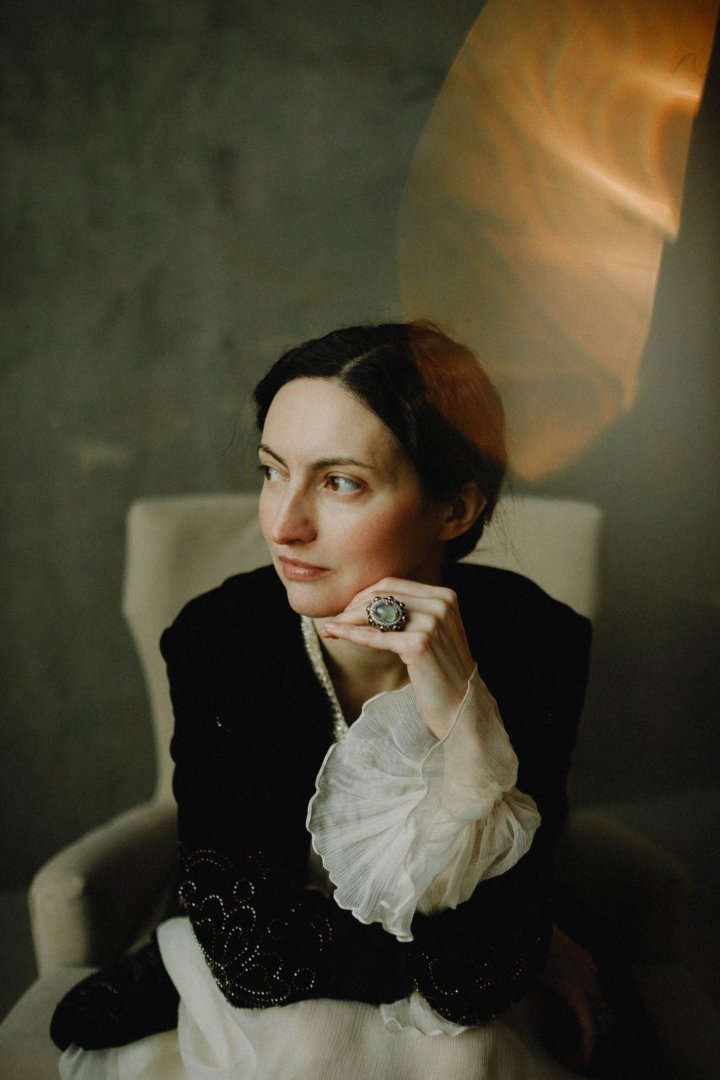 Like Alix Dumas, Elena Okutova uses the lost wax casting method and likes to add a few firings of grand feu enamel to her gem-set jewellery, which gives them a certain timelessness. Her inspirations are many and varied, from Ottoman to medieval and baroque. 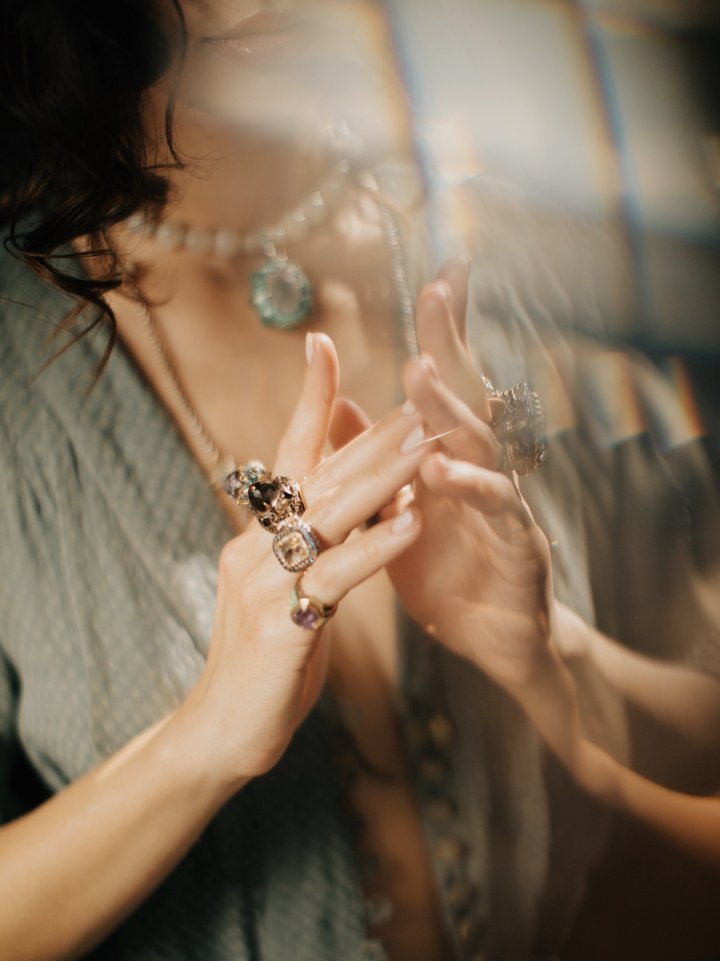 “As a girl, I loved reading. My grandmother had a large collection of art books. I’d turn the pages and see female characters painted by Russian artists, draped in wonderful fabrics. I wanted to be part of this magical world. When I grew up, I decided to bring my imaginings to life. That’s why I work with such rich colours. I learned metalworking and enamelling at university but the design side is what I most enjoy. I’ve chosen the best craftsmen and women to transform my ideas into reality. Everything you see, my jewellery, the boxes and the jewellery cases, it all comes out of my imagination.” 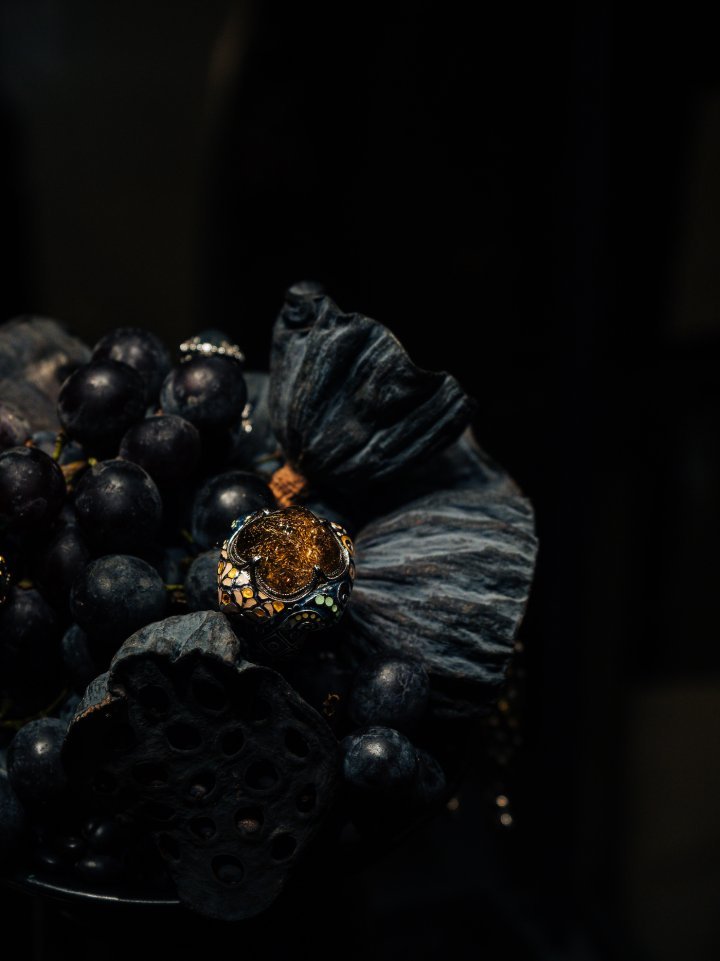 And what a fertile imagination. Elena Okutova’s jewellery is truly one of a kind, which is doubtless why Eva Green is such a fan. The French actress was one of the first celebrities to fall for the charm of what she calls her “talismans”. 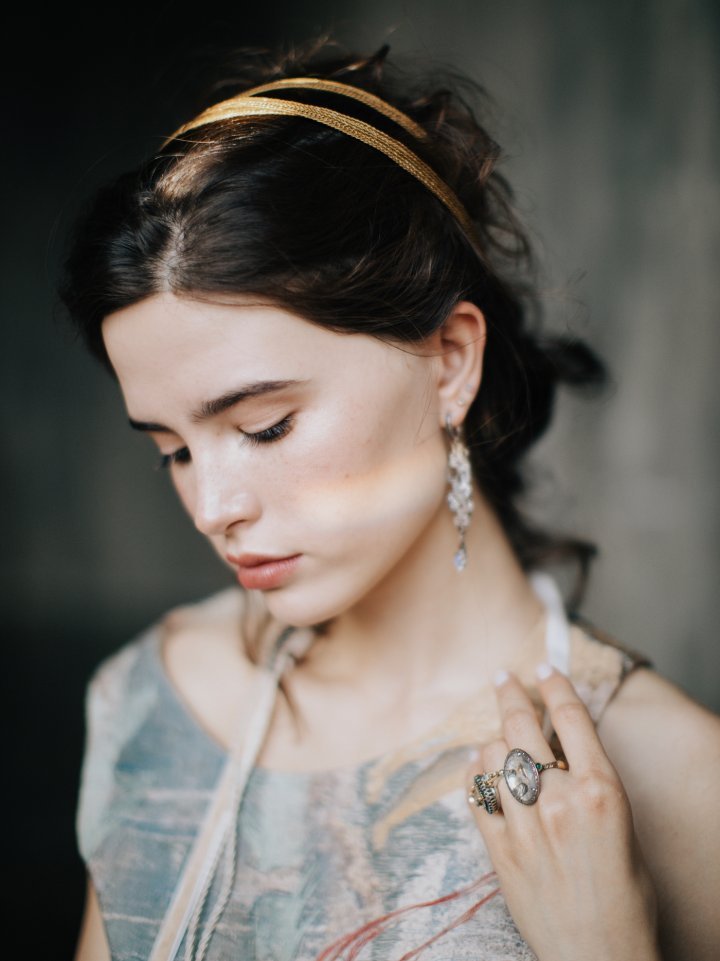 Elena Okutova makes one-off jewellery pieces that patiently wait for the woman who will wear them. Her creative process is wide-open to the subconscious. “I have visions,” she says. “The idea for an object comes to me and without understanding why, I know I have to make it as it appears. Then it’s a question of waiting for the right person to come along. And they always do. When I sell one of my creations, I ask the person to make a wish. It’s a kind of ritual. Each time she looks at her piece of jewellery, her wish will come back to her. So many magical things have happened after a wish! Like in a tale.”

There is something equally magical about the way Vincent Michel came to jewellery. “No-one in my family has any connection to jewellery, but even as a kid I loved stones, crystals and forging metal,” he explains. “I had the good fortune to grow up near Estavayer-le-Lac, in a charming little village named Font. We had a big family home with room for me to make fires, where I used to forge arrow tips and sculpt. I’ve always enjoyed working with my hands. One day, when I was twelve, my mum took me with her to get a piece of jewellery repaired. I was totally fascinated by the torch and all the different tools. The artisan offered to show me some techniques. I spent three days with him, during which I made a small pendant, and went back again during the school holidays. I made jewellery for my mum, for my neighbour, and eventually I enrolled at technical college, at Ecole Technique de la Vallée de Joux. I set up a workbench at home, bought some tools and that’s how it all began. I passed my diploma, was named best jewellery apprentice and won the Swiss jewellery-making championship at SwissSkills in Lucerne.” Some things are just meant to be… 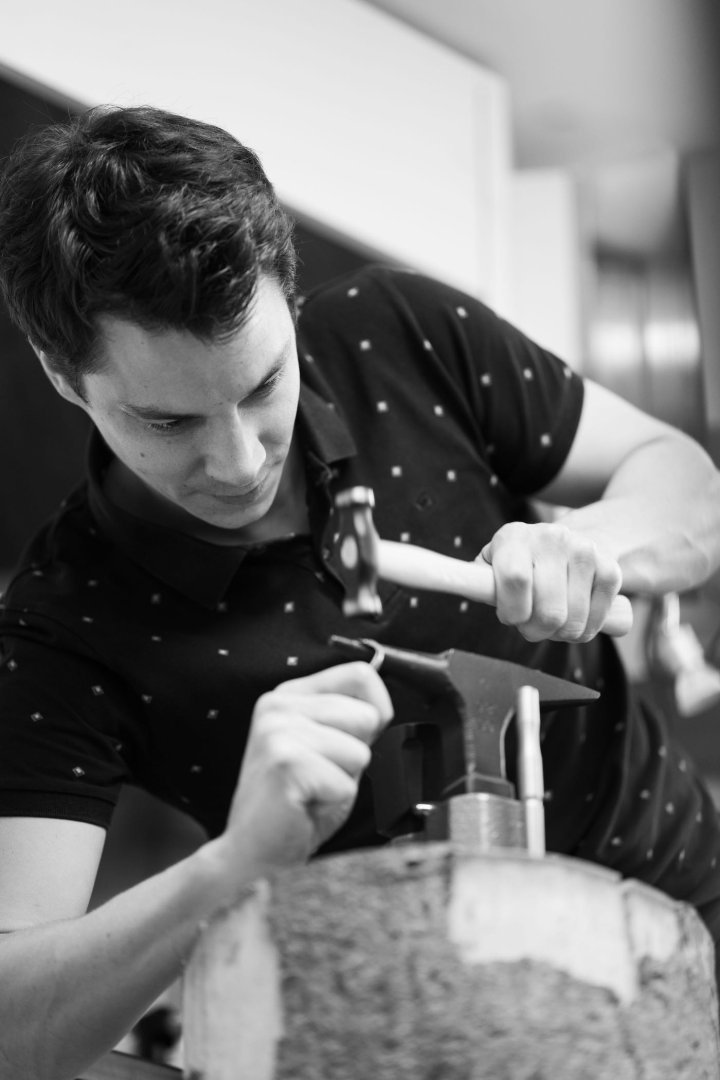 Nature is one of Vincent Michel’s greatest inspirations. One of his display cases contains a ring that captures Lake Geneva in its many guises.

“I live at the tip of the lake, in Villeneuve. Every morning I take the train to my studio in Lausanne. I never tire of the lake’s beauty. Sometimes it’s blue-green, sometimes there are storms. I set out to recreate all this in a ring.” 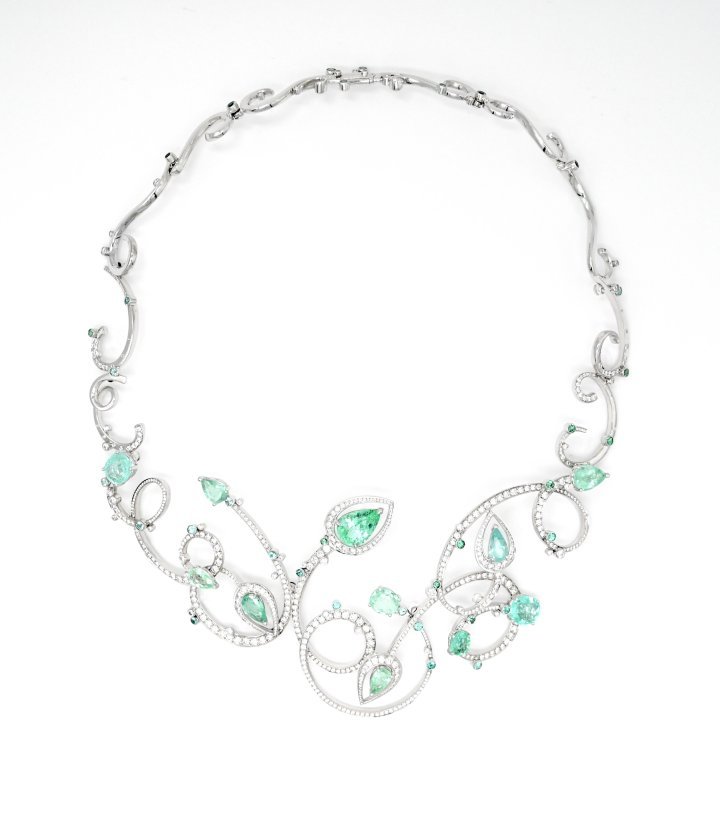 Another display case contains a necklace whose flowing arabesques represent a bee’s darting flight, leaving behind a trail of gold woven with 660 diamonds and 45 Paraìba tourmalines. 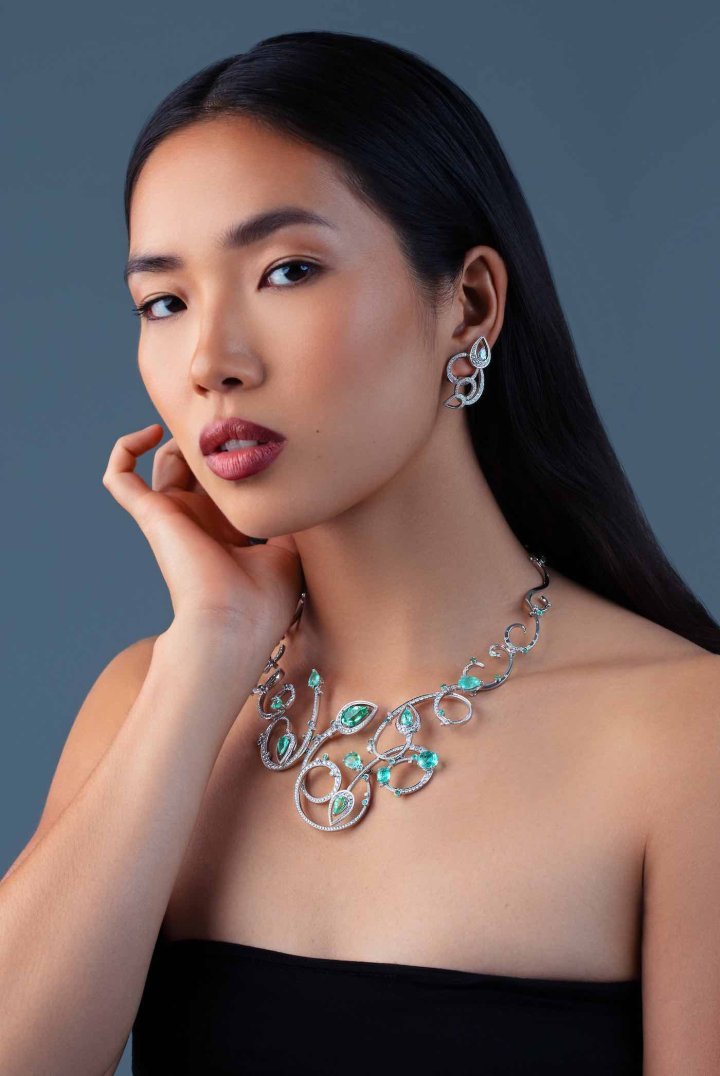 “When I was young, my parents had these huge lavender bushes, filled with bees. I used to shake them and watch the bees fly off in this wonderful harmonious swirl. This necklace symbolises that movement.” Vincent Michel’s jewellery pieces are sculpted treasures that remind us of the beauty and magic of nature, his muse. 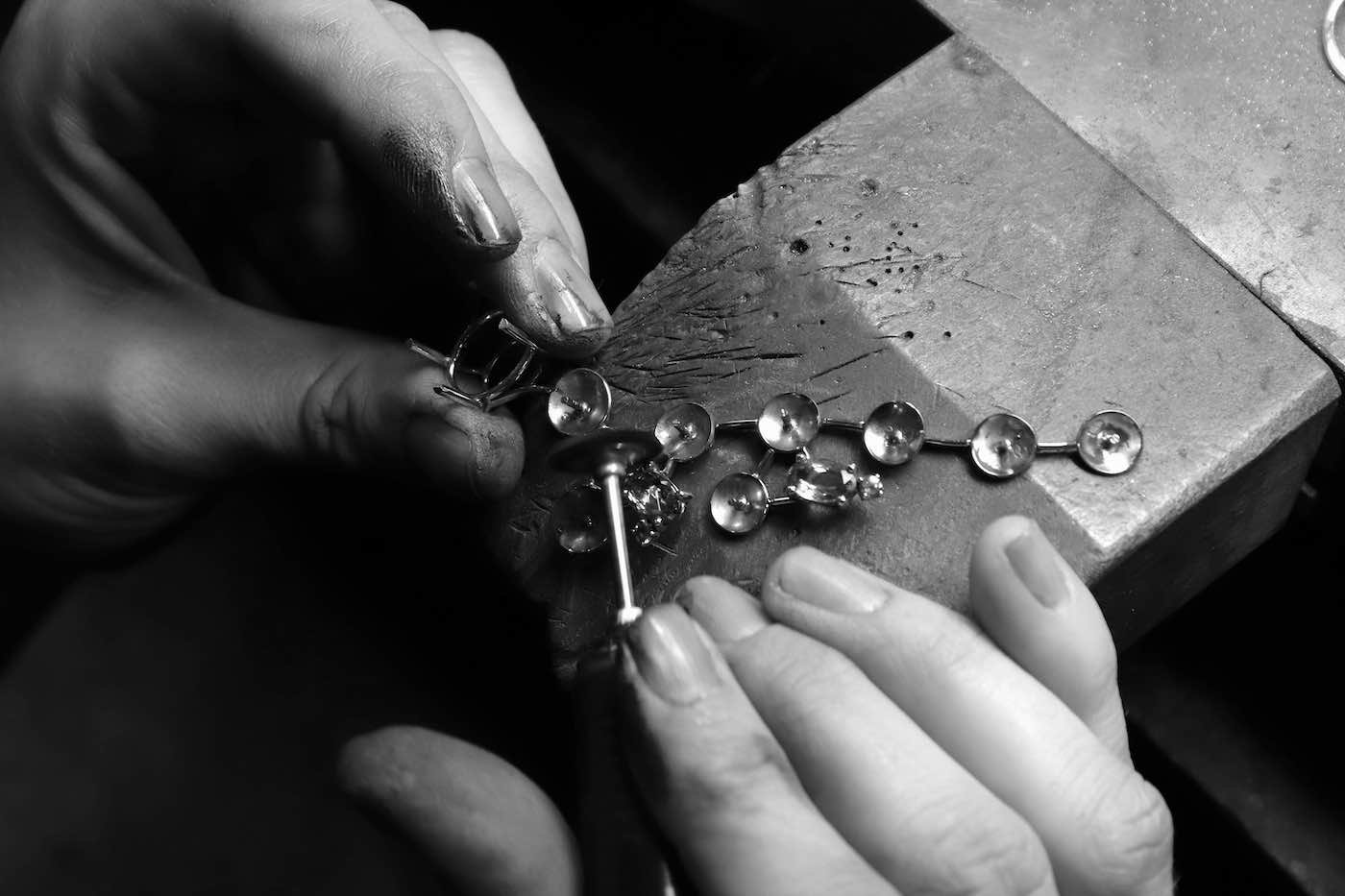 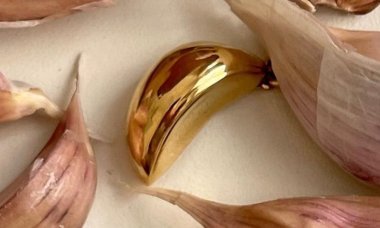 Ukrainian jewellery brands will be presented at the jewellery trade show, which will take place in Geneva on November 3-6, 2022. The exhibition is (...) 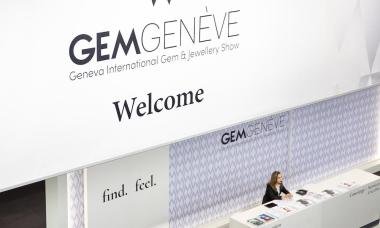 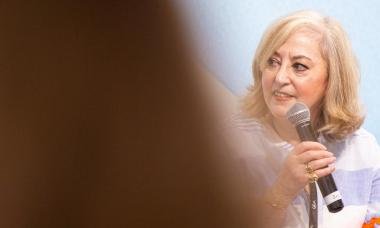 “Jewellers are like artists; they capture our moment in (...)

Since the very first edition of the GemGenève fair, the organisers have invited famous historian and author Vivienne Becker to create the “Designer (...)
GemGeneve