From Finissimo to Piccolissimo: with its recently gained expertise in ultra-thin calibres, the Roman brand is inserting miniaturised mechanics (1.30 grams!) back into the heads of its Serpenti secret watches, replacing the quartz calibres used until now. This decisive step establishes the Serpenti’s preeminent position in the Bulgari pantheon. Fabrizio Buonamassa Stigliani, the brand’s creative director of watchmaking, shares this epic story with us.

From Finissimo to Piccolissimo: with its recently gained expertise in ultra-thin calibres, the Roman brand is inserting miniaturised mechanics (1.30 grams!) back into the heads of its Serpenti secret watches, replacing the quartz calibres used until now. This decisive step establishes the Serpenti’s preeminent position in the Bulgari pantheon. Fabrizio Buonamassa Stigliani, the brand’s creative director of watchmaking, shares this epic story with us.
H

umans have always been inspired by nature, which is why we have a natural tendency to ascribe a biological morphology to the different parts of a watch. For instance, we describe the link between the case and the bracelet as “horns”, the dial as the “face” and the pointers as “hands”. Since the 1950s, Bulgari has endeavoured to take this biomimicry to its logical conclusion with the Serpenti. If the head and its glittering eyes are not enough to bewitch the wearer, the watch bracelet wraps around the wrist like a serpent’s cool embrace.

In 2022, after being animated electronically for several decades, the Serpenti is finally reverting to a mechanical calibre, miniaturised through advanced engineering. In nature, the snake has a remarkable ability to adapt its body temperature to the ambient conditions. After half a century, this reptilian analogy in horological form is once again enjoying the warmth of a mechanical movement, as it did in the past. The intimate dance between animal and human can once again resume.

In 2022, after being animated electronically for several decades, the Serpenti is finally reverting to a mechanical calibre, miniaturised through advanced engineering. 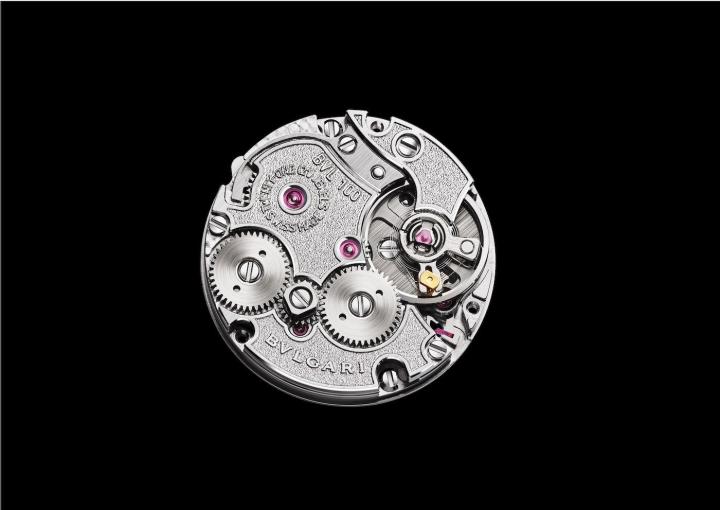 The extreme miniaturisation of the Calibre BV100’s 102 components is illustrated by its barrel, with a total diameter of just 5 mm and a thickness of 1.47 mm, fitted with a spring that is 170 mm long before it’s wound.

To create the BVL100 calibre (the first of the new Piccolissimo series of movements – it means “very small” in Italian) with its diameter of 12.30 mm and its 2.50 mm depth, Bulgari’s engineers drew on the experience they have gained over recent years, working on the ultra-thin Octo Finissimo series, which has set several records. The new miniature movement, weighing just 1.30 grams (!), is housed in a special cavity inside the reptile’s head.

“When I arrived at Bulgari in the early 2000s, the Serpenti line had only twenty or so references, most of them high jewellery. But its past was glorious: many brands had seized upon the snake motif, but only Bulgari really made it into something distinctive, an icon of luxury. This collection made the brand’s fortune. It needed a new lease of life, so eventually we decided to put the snake back at the centre of the brand,” says Fabrizio Buonamassa Stigliani. 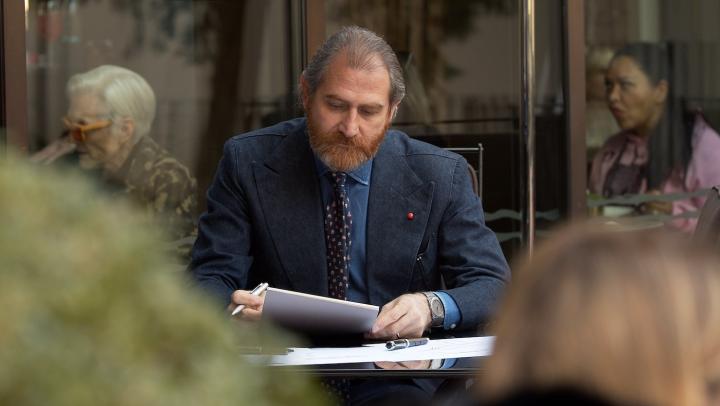 “This collection made the brand’s fortune. It needed a new lease of life, so eventually we decided to put the snake back at the centre of the brand.” 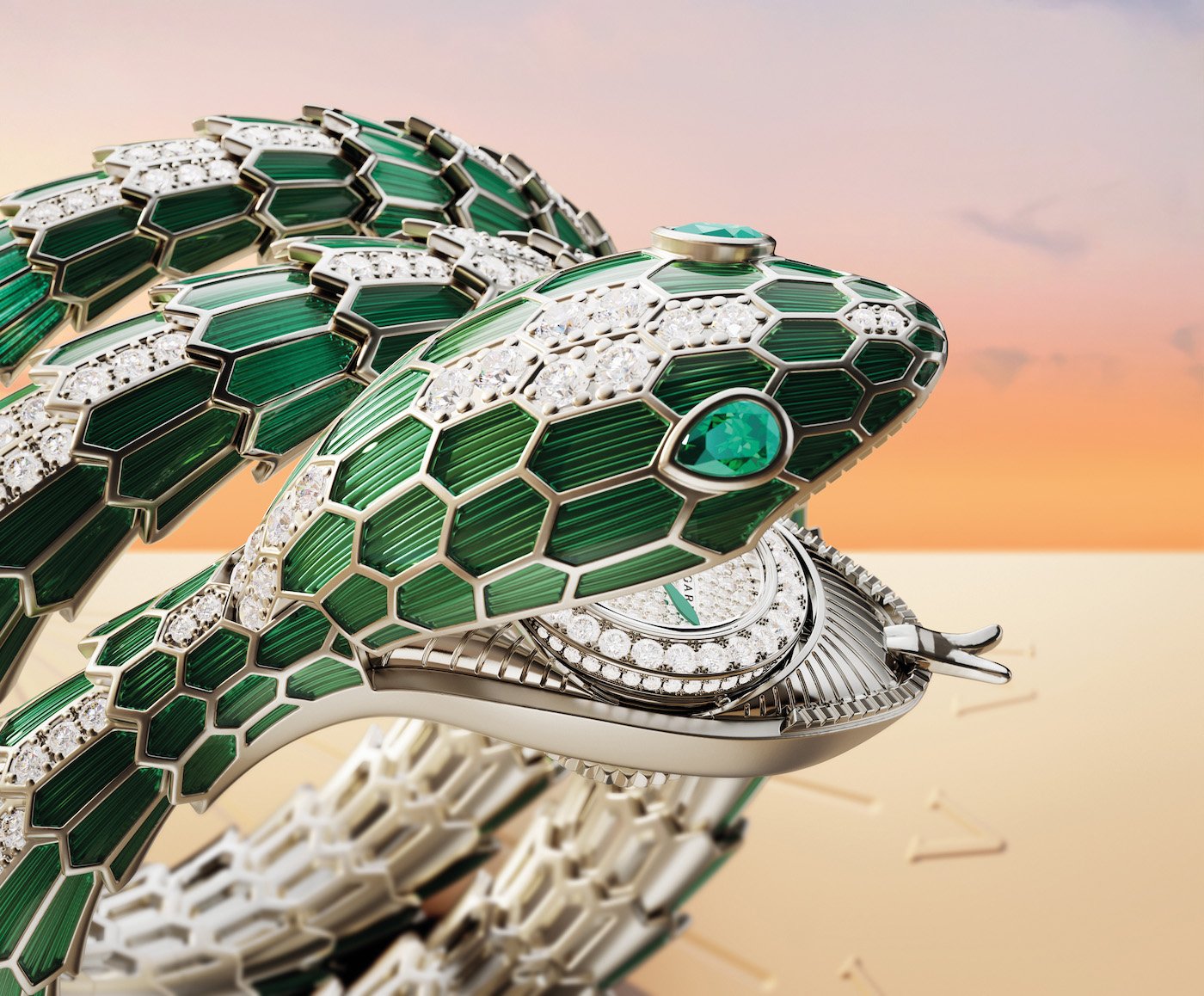 Before joining the Roman brand, the Neapolitan designer worked for Fiat in Turin. One day he decided to send his sketches to Paolo Bulgari, then CEO of the still family-owned brand. They hit it off over their shared passion for cars. Today, as head of the brand’s watch design centre in Neuchâtel, he is responsible for reconciling the italianità of the Bulgari aesthetic with cutting-edge watchmaking engineering, of which the Piccolissimo movement is a shining example. The Serpenti Misteriosi, as designed by Fabrizio Buonamassa Stigliani. A press on the tongue reveals the watch, under the snake’s head. A bidirectional crown on the case back allows the watch to be wound manually and the time to be set. 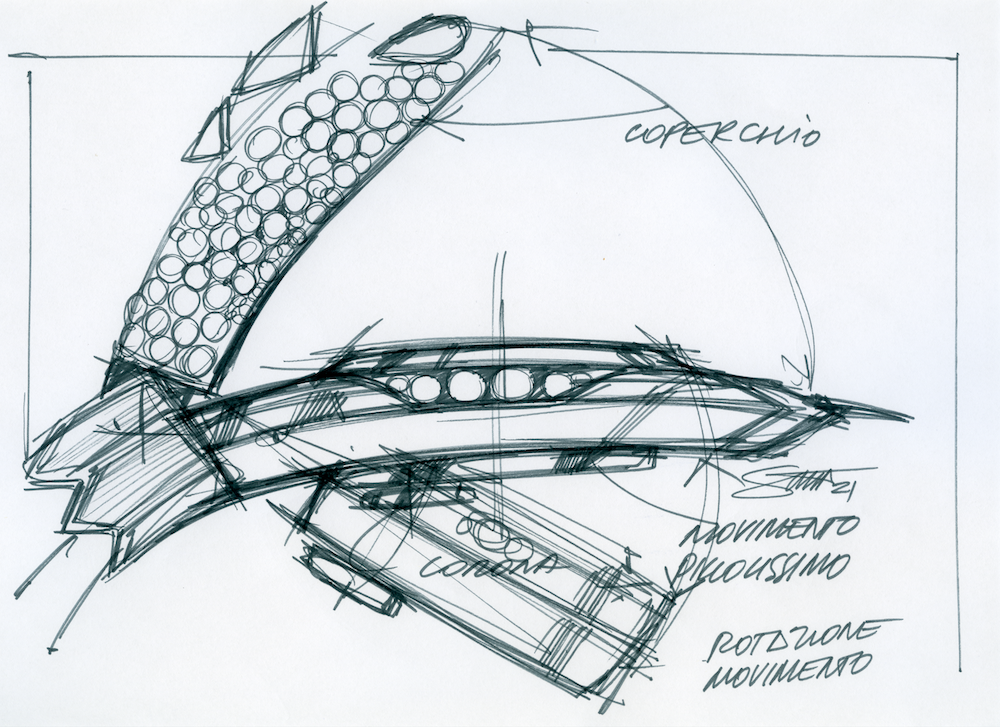 A new field of possibilities

“The design of this new calibre opens up great prospects not only for the Serpenti but for all our women’s lines,” says Fabrizio Buonamassa Stigliani. “It’s a strategic project, in keeping with our manufacture. Mechanical calibres should not be reserved for more masculine watches.” 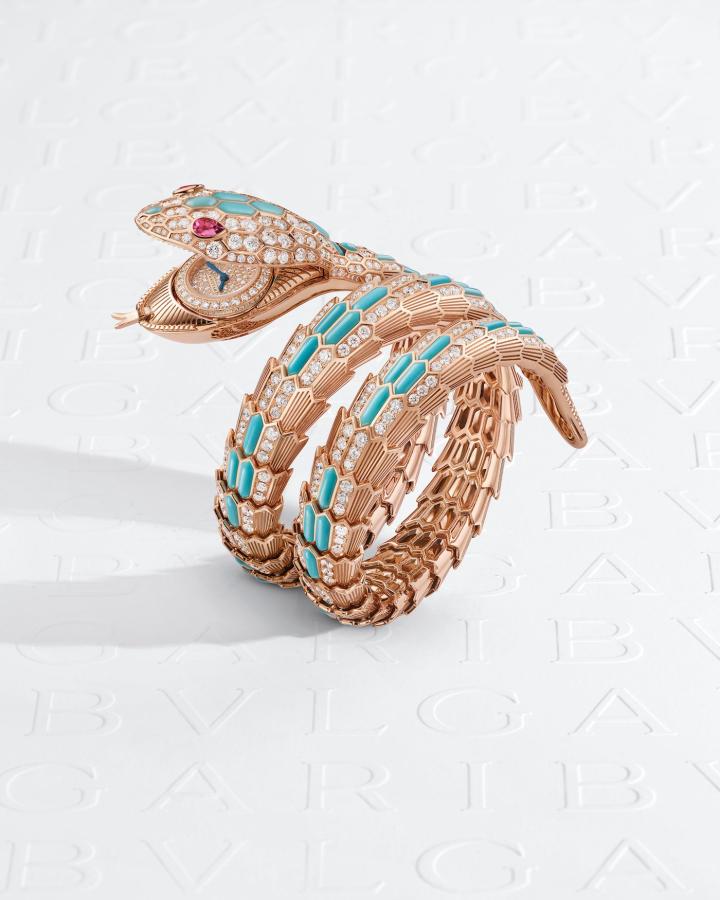 One of the four versions of the new Serpenti Misteriosi equipped with the Piccolissimo mechanical movement, one of the smallest in the world, entirely designed and produced at the Bulgari Manufacture in Le Sentier.

The BVL100 calibre brings to a close a 50-year 100% electronic parenthesis for the Serpenti. It resuscitates the concept of the tiny mechanical motor present in all women’s watches until the early 1970s. Originally, as Bulgari did not have its own manufacture, Serpenti watches were equipped with micro-calibres from various different movement manufacturers. With the advent of quartz, the industry stopped producing mechanical calibres of this size.

Until the early 1970s, Serpenti watches were equipped with micro-calibres from various different movement manufacturers. With the advent of quartz, the industry stopped producing mechanical calibres of this size. 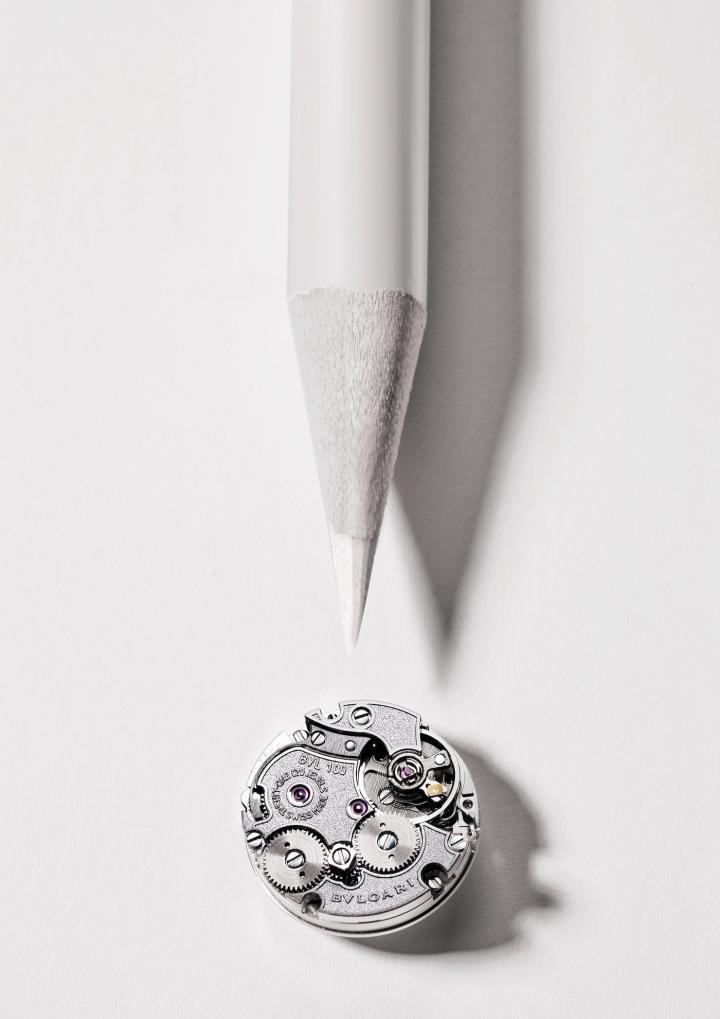 With a diameter of 12.30 mm and a thickness of 2.50 mm, the BVL100 calibre indicates the hours and minutes and is housed in the head of the snake, inside a dedicated cavity. 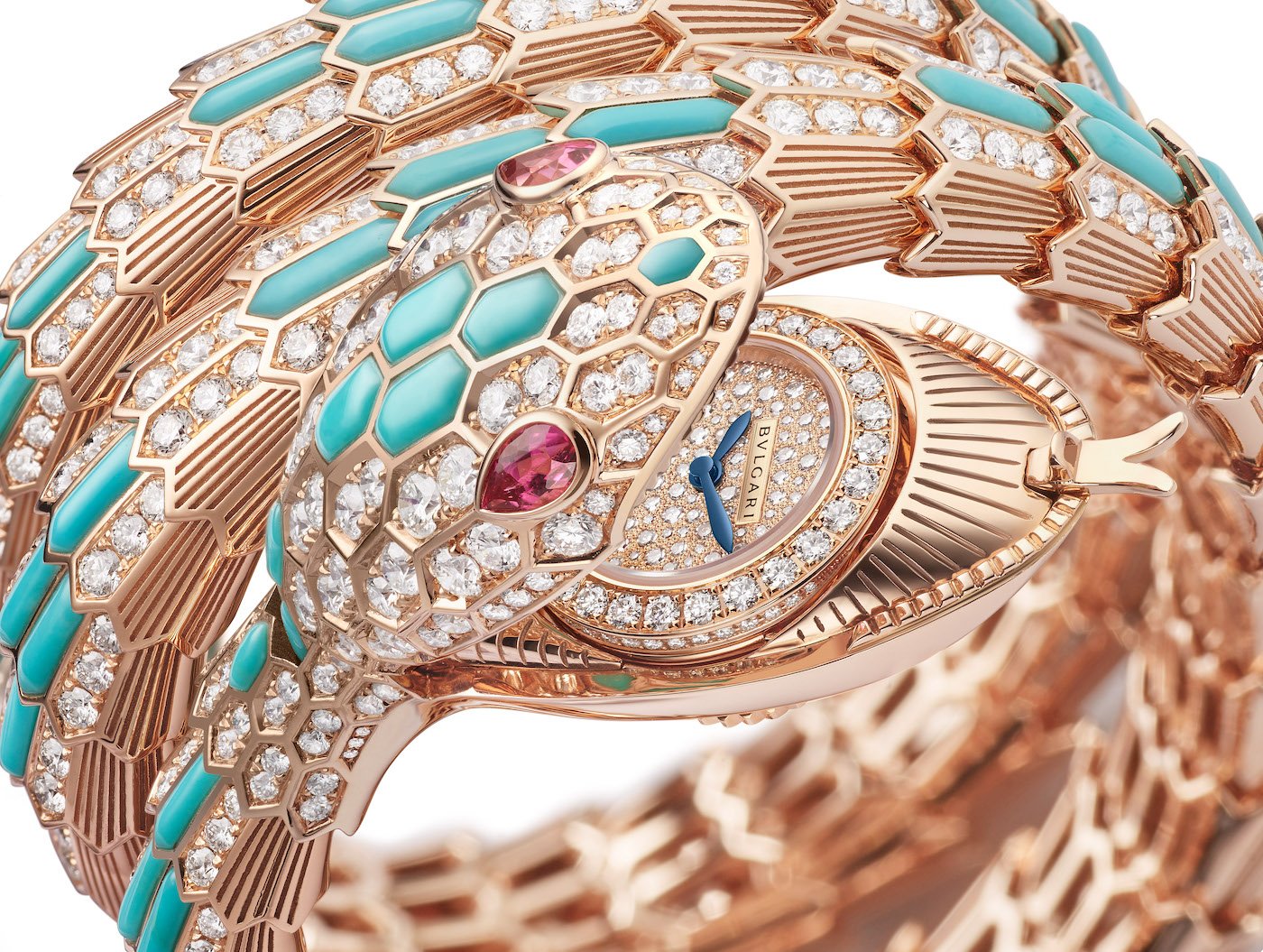 The four new Serpenti Misteriosi secret watches also inaugurate a new production process. Until now, the body of the Serpenti came from Bulgari’s Italian workshops, with the head – where the calibre is housed – produced in its Swiss workshops. “Now the calibre can be completely detached from the head: this means that the entire snake can be manufactured in Italy, while our Swiss workshops are dedicated solely to the movement. This alleviates the challenge of ensuring the components align correctly,” explains Fabrizio Buonamassa Stigliani. 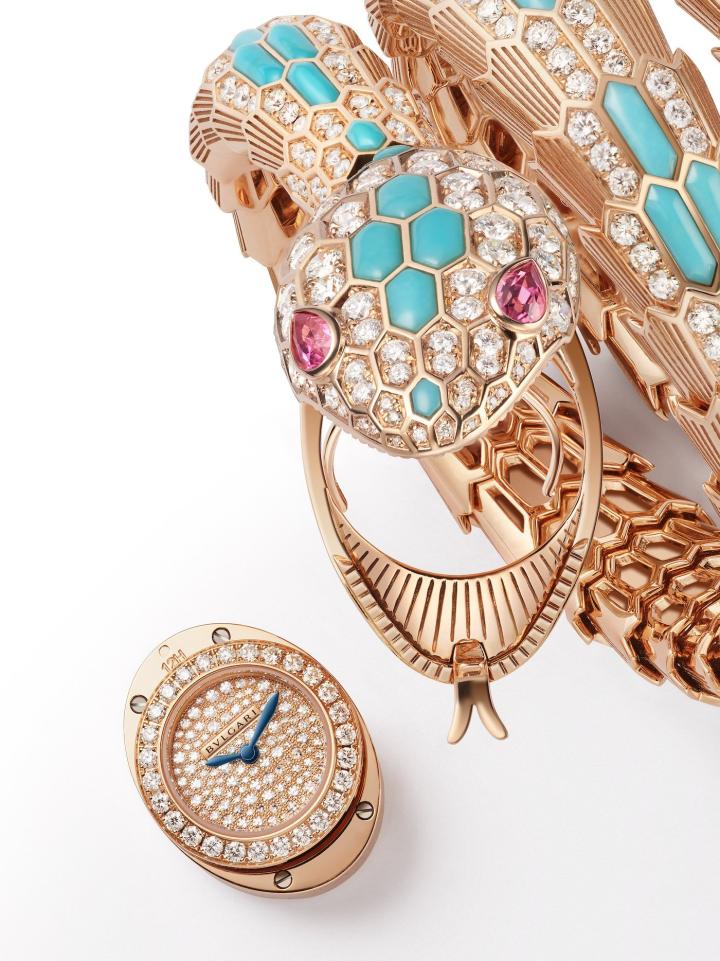 The calibre and watch head are now made completely independently, resulting in a better distribution of expertise between Bulgari’s Italian and Swiss workshops.

In the designer’s quest for “mechanical aesthetics” even the tongue is functional. Rather than being purely decorative, as it was in the past, it conceals a mechanism to open the head of the snake and thus reveal the secret watch.

In this return to the Serpenti’s roots, the new models naturally revisit the original 1950s design. With a few nuances: “We have redesigned the Serpenti with slightly different proportions. Back then, the snake’s head and body were very long. Today, the head is smaller and thinner.”

“Back then, the snake’s head and body were very long. Today, the head is smaller and thinner.” 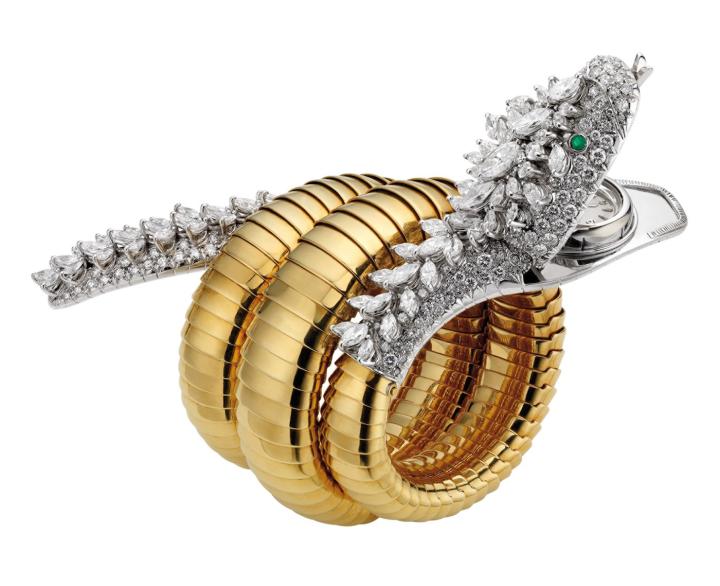 The new models continue the legacy of the first Serpenti watches – notably the model created for Elizabeth Taylor when she played Cleopatra in the Cinecittà studios in Rome in 1962. 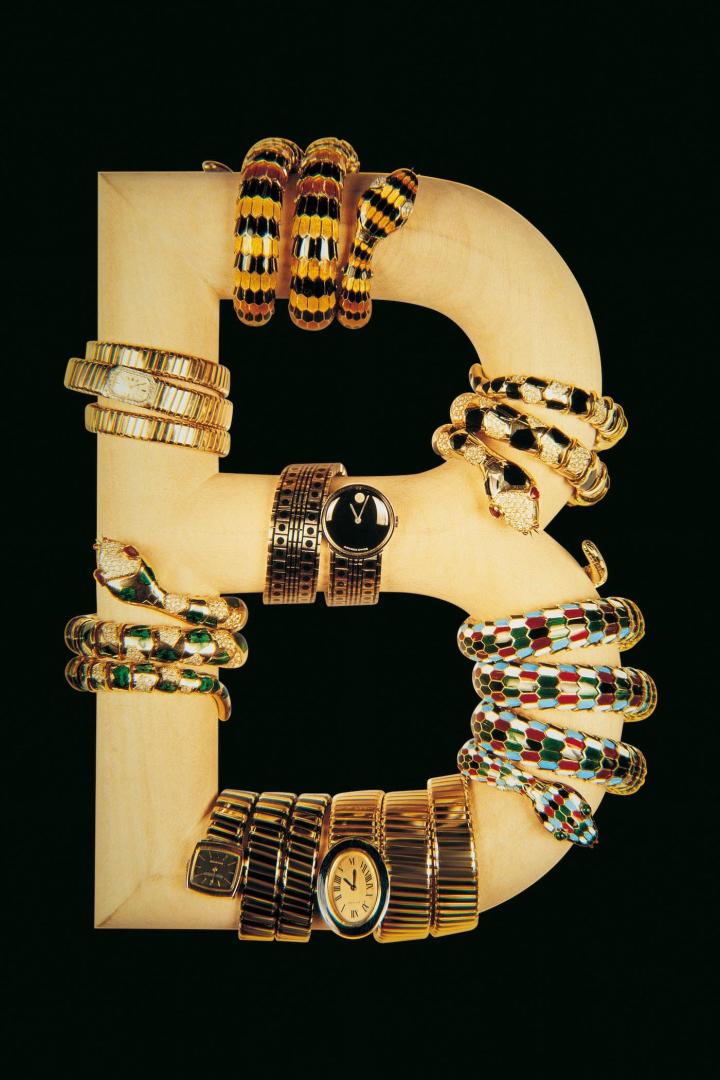 An ad campaign for the Serpenti, from 1975. There have been numerous variations since the model’s reinvention in 2009.

These new models mark the culmination of the redesign of the Serpenti line that started back in the 2000s, and which saw the successive appearance of the Serpenti Scaglie, Serpenti Tubogas, Serpenti Spiga and more recently the Serpenti Seduttori models. In addition to the high jewellery secret watches, there are now much simpler models suitable for everyday wear. The snake has now extended its reach to all of Bulgari’s horological price ranges. 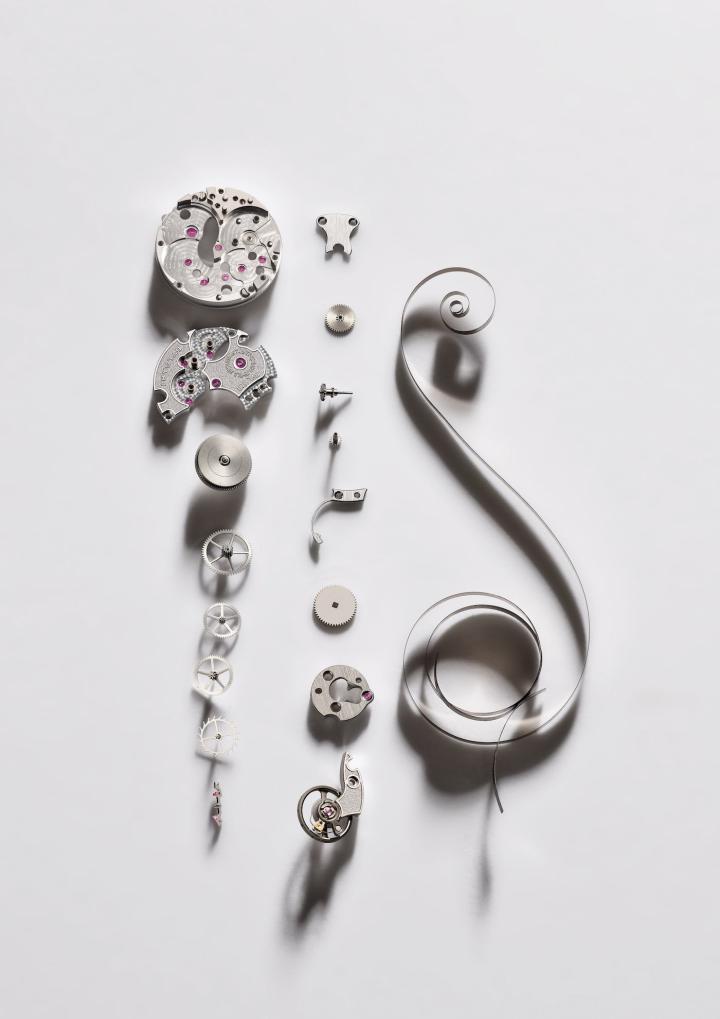 Bulgari has used all the expertise gained from developing the Finissimo watches to create an ultra-compact movement weighing only 1.30 grams.

Compared to the mechanical calibres of the 1950s (some of which were even smaller, however hard that might be to imagine!), the new Piccolissimo movement offers the advantage of a much longer power reserve, in the range of 30 hours. “It took us almost two years until we managed to produce the first prototypes of the movement at the beginning of 2020,” says Fabrizio Buonamassa Stigliani. “The success of our workshops will open up new ways of designing jewellery watches. In the future, you will see women’s models that are totally different from what we have been able to do until now. This is just the beginning.” 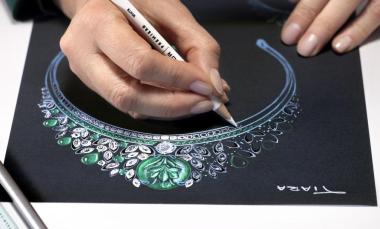 The master of coloured gemstones marks the 70-year reign of Queen Elizabeth II with the creation of its one-of-a-kind ‘Jubilee Emerald Garden’ High Jewellery (...) 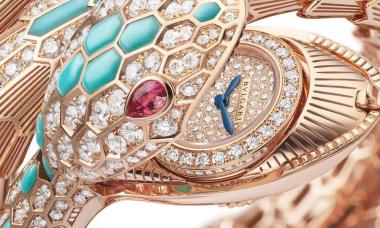 On the occasion of the LVMH Watch Week, Bulgari is introducing four Serpenti high jewellery secret watches revisiting the iconic design from the 1950s. (...) 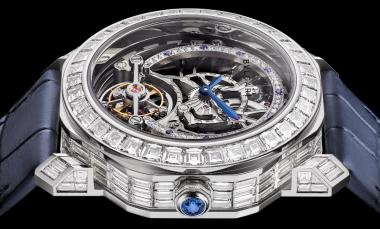 For the first women’s Octo, Bulgari deploys the full range of its jewellery and watchmaking skills.
Bvlgari

A striking new collection joins Tiffany & Co.’s arsenal of iconic creations: Tiffany Knot. A nod of respect to Tiffany’s hometown, the designs are (...)

The 75th edition of the Cannes Festival coincides with the 25th anniversary of its partnership with Chopard. To celebrate this double jubilee hand in hand, (...)

The French jeweller completes its collection with Animal Tattoo, a series of 21 exclusive pendants inspired by terrestrial and marine wildlife depicted in (...)

The irreverent jewellery and poetry of Lorenz Bäumer

This engineer by training, who became a jeweller by passion, claims the distinction of being the only independent jeweller in the Place Vendôme. His (...)