When Leila Tai completed her master of fine arts degree in metal work at the University of Wisconsin in Madison in 1968, she stopped in New York on her way home to Beirut, a chance visit made on the urging of her classmates, who were sure she’d fall in love with the city. “I ended up staying six months,” Tai says. Early on in her stay, she stumbled upon artist Ed Wiener’s jewelry gallery, a Madison Avenue fixture, and in the way of all serendipities, landed her first job. 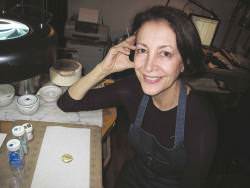 After six months, family brought her back to Lebanon, and a teaching position at its American University, “but I wasn’t ready to teach,” Tai says. “I decided I wanted to establish myself in New York.” Two years later, back she went to the Big Apple, where she’s remained ever since. And thank goodness for that. The local jewelry trade has benefited greatly from her talents.

She’s designed for both fine jewelers such as Gemveto and Van Cleef & Arpels and fashion companies like Trifari and Monet. About 10 years ago, Tai began to create one-of-a-kind nature jewels using a 15th century enameling technique known as plique-à-jour, which literally means stretched in such a way that the light of day may pass through. From April 25 to June 28, The Forbes Galleries in New York will exhibit pieces belonging to Tai’s Spring collection, along with other works of “striking individuality,” in a designer showcase organized by the National Jewelry Institute.

Couture International Jeweler: How did you get started with enamel? Leila Tai: I came across it looking at techniques. I took classes with [New York jewelers] Robert Kulicke and Jean Stark and they taught us mostly cloisonné enamel. I learned it the traditional, ancient way. I realized how beautiful it was. But I kept thinking it would be so nice to make transparent enamel. I was discouraged from doing it because it’s so difficult. But when I did it, it came so easy to me.

CIJ: How long does each piece take? LT: To sit at my bench and have the piece of mind to do this work takes time. The [praying] mantis took me time because I wanted to capture the greenness—the vision of it sleeping on the grass—so I encountered a lot of mechanical difficulties. I’m not interested in high production. I’m interested in quality and small production. I can duplicate the enamel. I’m not sure that I want to.

CIJ: How is your artistic vision evolving? LT: I’m developing an incredible taste for gems. I’m hunting for unique gems and special cuts of diamonds. My favorite is the rose cut and also some beautiful colored stones. Some of the ones we call semiprecious are actually very precious. Tsavorites, for example, work better with the mantis, which has a grass- green. People asked me why I didn’t choose emerald—emerald doesn’t glitter. 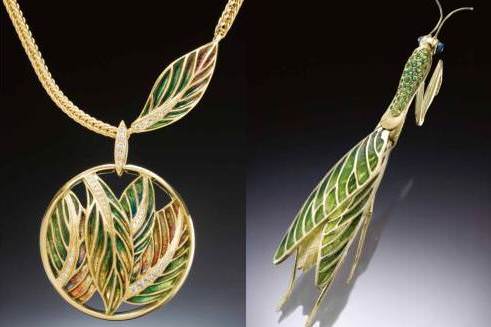 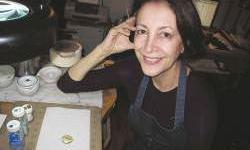 At an awards ceremony on Monday, the AJDC presented designer Leila Tai with a Michael Good-designed sculpture, honoring her as the grand-prize winner of (...)
FOR MORE